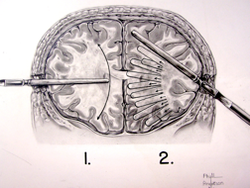 “Well, what have they got for us today?”

“Oh, nothing new I fear; done this procedure many times.”

“Really? One would think after all these centuries they’d have come up with a more efficient method. OH, but wait, we have… and yet, mine eyes do not deceive. You seem to labor still at the wheel of the archaic.”

“Oh yes indeed, they have, many different procedures in fact, but each for different usage and application.”

“So, why this method for this specimen?”

“Because he’s old. We’ve found that, apart from the sentimental value, retaining the methods that worked over the years yields better, or shall we say smoother results.” He paused, mid thought, “It makes progression seamless. Plus, in science, there are many examples where continuity and cohesion is called for.”

“Well yes, but we’re still leagues ahead of our predecessors. Xenos past used to use very elementary tools, and of course the procedure, as well as the results, was infinitely less refined.”

“I heard, or actually read, that they had a very different name for it too. I forget it though.”

“Oh yes…” his eyes focused, through the thin glass compound of the eye visor, at the intricately delicate job at hand. “Very different indeed.” He whispered, “And equally as unrefined. That’s why I prefer mine. Markedly more tactful,”

“I thought it was a just a nickname until I heard a few stewards referring to it as such. Have you been spreading the word?”

“Ha. No. It appears genius rubs off. Although that is something of a misnomer; if genius – in this case denoted as a noun – rubbed off, implying that it can thence be shed, or lost, the perceived intelligence would be diminished within the so-called genius – in this instance myself - and gained by the receiver – in this case being the stewards. Alas, it is something we have yet to perfect,” he paused again, thinking… “strange that…”

Reems continued. “That we’ve apparently failed in the quest to develop an effective device for the procedure of intelligence transference.”

“Oh. How did you come to that name though?”

“Aah, it was bestowed upon me by my fellow …”

“Redressing, yes, that is mine. It’s simple really. Like putting on a new suit – getting dressed. He – or rather we – are simply giving him a new suit. For each role he plays he acts different, thinks different and usually wears something different. Hence: Redressing.”

“And what was it called before again?”

“What sparks this interest Fisch, why concern yourself with such trivial matters?”

“Curious I suppose. It used to be a medical practice yes?”

“Correct. Although in the interests of full disclosure; redressing, and us, well, we are the seventh form of it.”

“In the beginning, before the medical applications, or experimentation's, it was used as a torture method – perhaps also a misnomer – they did it for their own enjoyment… no one ever came back from the hands of those barbarians. There was no reason for it.” His gaze was affixed straight ahead on a spot in the corner of the lab. “So. From torture, the scientists got hold of it, then the doctors… then business-slash-empires, and then leagues later, finally, us, the engineers.”

“I know what I said. But, dear Fisch, we are the third rendition, the highest conceivable elevation of our profession, combining all that came before us… taking into account room for evolution, progression and innovation. We are, as some ancient Xeno’s called it, the Zen of our kind.”

Reems finished his work. “I’ll leave them to close.”

“Another few hours. Give him time to marinate, let the brain acclimate. Then we’ll coax him out of his comatose state.”

“I didn’t. He is, I’d sum-mate, around two hundred and some odd years.

“How many in his years.”

“A little over seventy. I believe” he said dipping his hands in the hygiene tank.

“And what was he?” Fisch was leaning over it, studying the face of the specimen.

“Actually he was a soldier. Currently, he’s the last active of his kind. If the others didn’t die in battle, then it was due to complications. Quite a story actually. It was one of his that was at the center of the fall of the Strohle Empire. Hm…” He pinched the bridge of his nose recollecting the stories of old. “Defenders and offenders of their homeland; then captured. Deemed too valuable to execute; reanimated as the front-line dogs of their new masters. Responsible for so much death, on every side.”

“I’ve heard tales of this.”

“Yes. A monumental mistake. They should have put them all to rest that day. Their reputation was… is, unique. They were like the plagues of the old worlds. Fortunately, since they were an inherited power, they were limited in number. But even now, two centuries later, and they are still such an effective weapon. Still exacting some measure of influence.”

Fisch meandered over to the doors.

“After that power had been all but spent, only a few remained… they were saved, at least some were I hear. Others, abandoned on some forsaken battlefields, survived by some miracle… always tended to make a considerable wave in their own right, once recovered of course. Some say their greatest flaw of all, lies within their inherent, yet ultimately doomed quest to return home. Many are believed to be scattered in a host of arenas, much like this one. Either put to new uses, dissected for study or disappeared into obscurity, or in some rare cases, imprisoned…”

“I thought you said he was the last of his kind?

“He is in a manner of speaking. The last we know about. The last one we have. The only one I have seen, still retaining most of his faculties. Come. All this chat has goaded my hunger.

Whilst in the elevator Reems swiveled on his heels, squinting at the wall in thought, his right index finger erect. His mouth hung open for a moment before he spoke. “Oh, yes. I remember what they used to call it… some of the earliest attempts anyway. They referred to it as a, Lobotomy.”

“Mm. I actually believe it was at some point.”

“How does he recover from such extensive work on the cortex?’

Reems was silent for a moment before glancing at his colleague. “It doesn’t.”